Hnat was born in Yastrubenka village, Brusyliv district, Zhytomyr oblast, in 1913. After the rural school, he entered the agricultural college in Vasylkiv. He finished the workers faculty in 1934 and then Kharkiv Teachers Institute. He served in the military since 1940 and participated in World War II.

Hnat Tarasiuk returned to Yastrubenka in 1946. He taught Ukrainian language and literature at a rural school and sent correspondences to a local newspaper. In his later years, he studied the village history, made sketches of old houses and mills from memory and wrote down his reminiscences.

Most of Hnat Tarasiuk’s known paintings (he neither signed, nor dated them) were created in the 1950s–1960s. They stayed in the painter’s house and the relatives whom he gave them as presents.

Hnat Tarasiuk in his works turned to traditional landscape plots: winter scenery; a man and a woman in a boat on a river; a lake. It is interesting that the painter changed the details when remaking his paintings: on one painting, a boy fishes by the lake; on another one, a hunter is shooting a bird by the same lake. He painted with oils on veneer or enameled cloth, and because of that some of his works were not preserved to this day.

The text is based on the materials of Rodovid Publishing House. 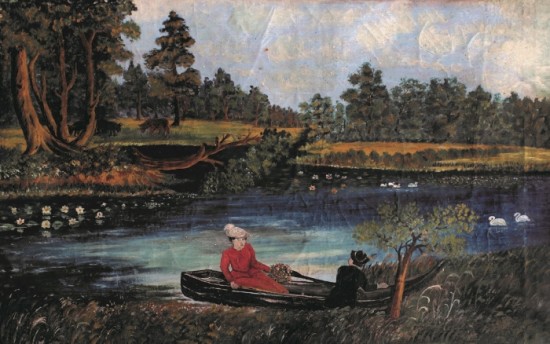